Actress & comedian, Tawny Newsome stars in the brand new CBS All Access series, Star Trek: Lower Decks which premieres this week. Created by Mike McMahan, Lower Decks goes where no Trek show has gone before. The lower decks of the starship, Cerritos.

This week, Tawny spoke with Eric Star & Michael Zavala of MZNOW to talk about what fans can expect from the new series. 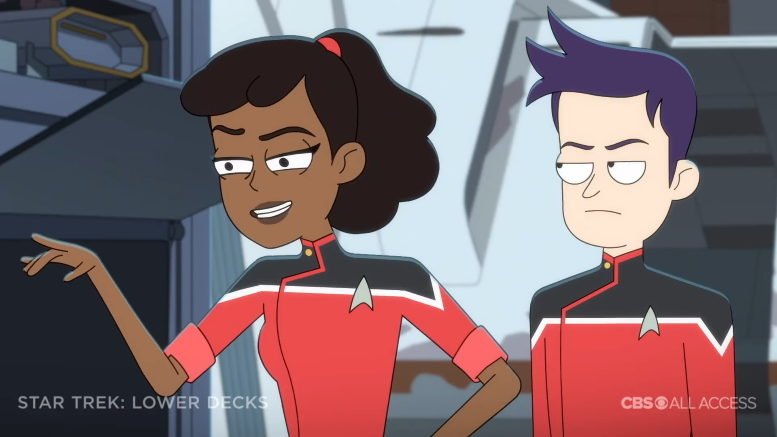 Were you a fan of Star Trek before you booked the show?

Oh yeah! I was a huge Star Trek fan. I think I booked it because I was able to improvise and rift so in-depth about just absolute nonsense. And, Mike McMahan, the creator, is a big fan of comedians and people putting stuff in their own words and improvising.

I kind of asked in the audition, like–because the script is really good–I was like, I don’t need to improve upon it, but, if you want to see kind of what I can do, can I make this my own? And he was like, “Oh my gosh, please.” So we just screamed back and forth at each other and laughed for 20 minutes.

I think that we built a comradery there, but yeah, I was a huge fan. I grew up watching DS9 and then went back and kind of watched The Next Generation too. So that nineties trifecta with Voyager, those three are like my main series that I was really into.

What can you tell us about your character and what we can expect this season?

So, it follows the trials and tribulations of these four lower deckers who are not always privy to kind of the main action that’s going on on the bridge. I think Mike’s idea was that, anytime Riker and the bridge crew and all those people were doing some cool away mission or encountering some new species he’s like, “there were probably broken replicators down below that these other people were having to deal with.”

So it kind of takes our stories and makes them the forefront and then makes whatever the bridge crew is dealing with, which is usually more exciting and action packed, and puts that in the background. And the interplay between them is really funny–between the bridge crew and the lower deckers, I think is really, really fun.

Does Spock gain any new siblings?

I don’t recall that. So much happens though. There’s so many references, even as a big fan, that flew by me.

And even when I was watching the rough cuts, I would have to text Mike and be like, “Wait, wait, wait. Did we meet that person during Enterprise or was that…?” Because there will just be thrown in references or people will just kind of whiz by. The great thing about it being animated is that we’re able to get voice talents from, you know, maybe you’ll see some previous favorites in there, animated, in their nineties form.

Listen to the entire interview here:

You can also hear more of Tawny on her podcast, Yo, Is This Racist?