Reno 911!: Thomas Lennon On The Return of Officer Dangle

It’s been 11 years since the final episode of Reno 911! aired on Comedy Central. Thanks to Quibi, the show has returned with brand-new episodes and doesn’t skip a beat!

Quibi focuses on short-form storytelling for mobile devices. The runtime for each episode on the platform is 10 minutes or less, which feels like the perfect fit for our favorite Sheriff’s Department. All-new episodes of Reno 911! are steaming now. 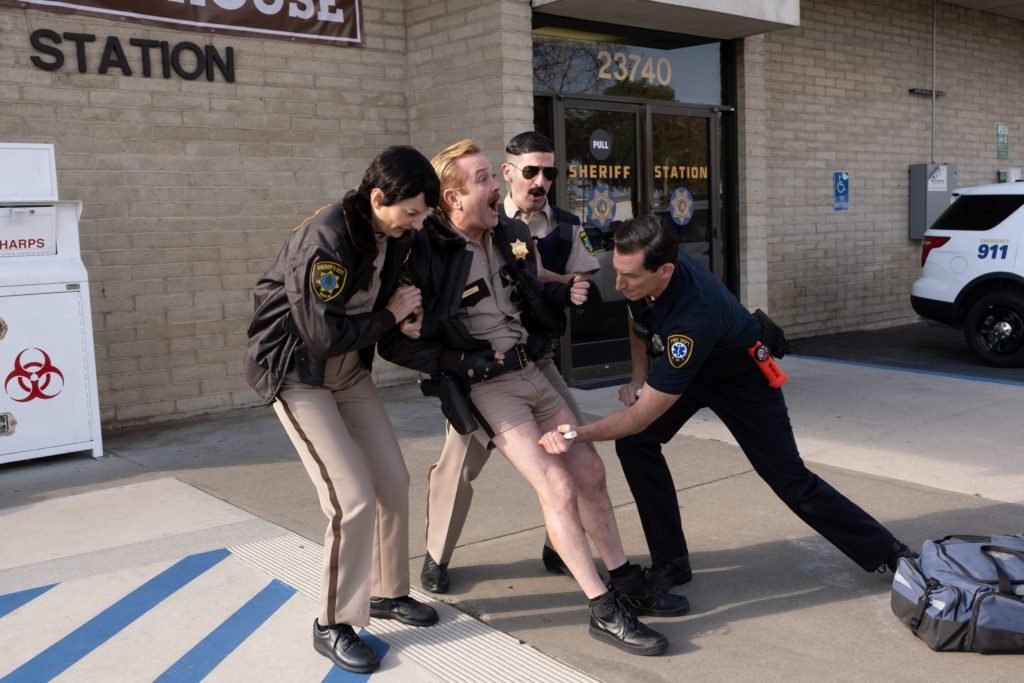 When I heard this show was returning as like a short-form series on, Quibi, I thought, what a great show for this platform. It really works well, doesn’t it?

It’s basically ideal. I don’t think we would ever do half-hour episodes or 20-minute episodes of Reno 911! again. The world we live in is very different. People mostly watch things on YouTube now. I think if you go to the app and watch them, if you’re a fan of the old show, I don’t think you’ll miss anything at all. To me, they’re more fun. They’re just like a little bit denser, a little bit more intense. It’s like an espresso instead of a big huge thing of tea.

What’s it like putting the shorts back on after all these years and returning to the role?

I will say this, I’m very, very glad that they’re made out of a somewhat stretchy material for a bunch of reasons. I mean, the weird thing is they sort of fit but not very well. But then the only kind of good news about that is that they never really fit that well in the first series. So, any way you wear them they’re going to look pretty stupid. So, I pretty much nailed it.

I think this season is gonna be huge. You’ve got great guest stars. I saw Weird Al…did I see Tim Allen as well? Does he make an appearance?

There’s a great episode coming up where Lieutenant Dangle has made the finals for Space Force. He’s getting put through the very final test to see if he’s fit enough to be part of the Space Force program. And there’s a little bit of a twist to that as there often is on Reno 911!. There’s a bit of a twist to that one that I don’t want to spoil, but that’s a really funny episode.

I was talking to Dylan Passage  (Joe’s Exotic’s husband) the other day, and we were talking about who he thinks should play Joe. We’ve narrowed it down to you and [David] Spade, which either one of you guys I think would nail the part. If Lifetime came to you and said, “Hey, we need you to play Joe.” would you do it?

100%, yes. I only worry that it might make me start smoking again.

All-new episode of Reno 911! are streaming now on Quibi. Sign up for free trial at quibi.com.